By Alex MakinSeptember 9, 2005No Comments

As detailed in my presentation to RMIT’s Integrated Transport Planning Course delivered on Friday the 2nd of September one of my major concerns regarding the lack of progress towards the goal of increasing public transport patronage stems from the poor integration that exists between government departments, such as the Department of Infrastructure (DOI) and the Department of Sustainability and Environment (DSE).

While the goal of higher urban density as supported by the DSE is proceeding rapidly, the provision of better public transport under the jurisdiction of the DOI has been minimal. Furthermore the Department of Treasury and Finance (DTF) has not signed off on the goal of increasing public transport modal share to 20% by 2020, meaning that the department which controls the final allocation of budgetary funding is failing to support the key goals of Melbourne 2030.

Likewise excessive layers of bureaucracy act as a filter, meaning that the approval for the funding of projects needs to pass an overbearing number of barriers through management ‘gatekeepers’.

In regard to transport expenditure the Public Transport Division (PTD) within the Department of Infrastructure (DOI) often competes directly with VicRoads for project funding. Unfortunately this is not a fair process, since the Public Transport Division does not have direct contact and hence direct influence on the Secretary of the DOI and likewise does not have direct contact or influence on the Transport Minister Peter Batchelor.

This is reflected within the Department of Infrastructure (DOI) Organisational Chart (Source: DOI Website): 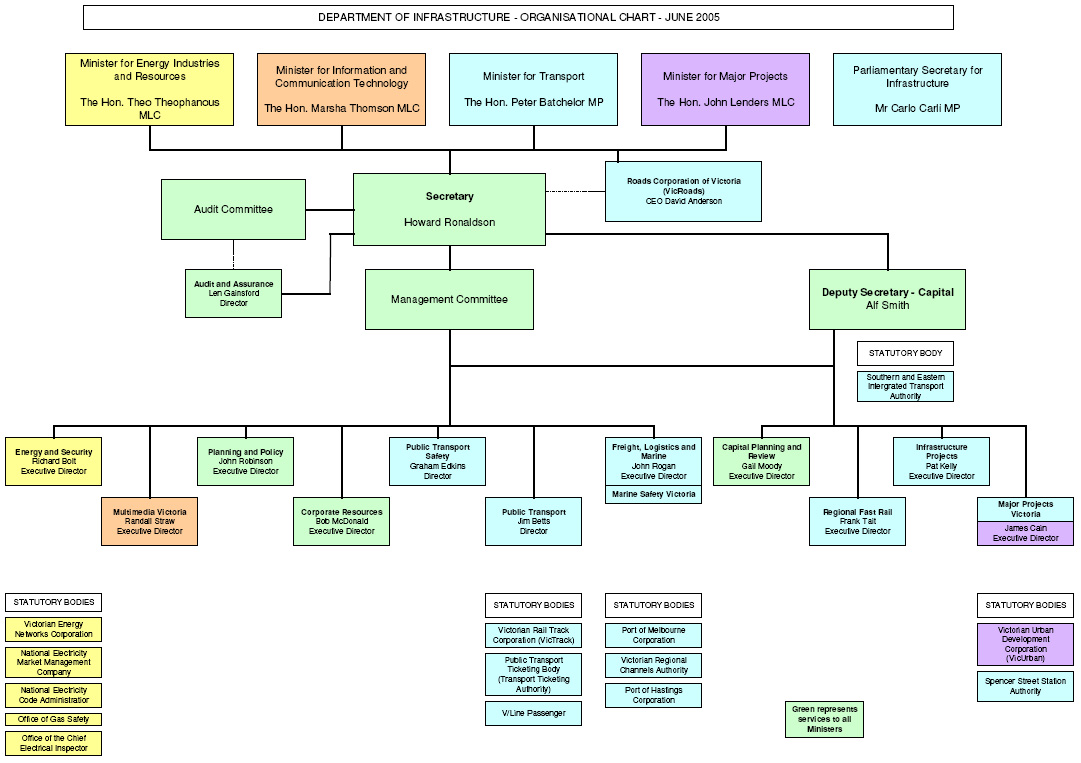 Not only is there a lack of support for Melbourne 2030 across government departments but there is also a lack of intra-departmental support within the DOI. This is exemplified due to the excessive number of ‘gatekeepers’ that the Public Transport Division needs to face, all of which filter information and serve as impediments to implementation.

The integrated Ministerial and Departmental model has proved highly successful in Western Australia, where the State Government restructured its various government departments (including the WA equivalent of VicRoads) into one Planning and Infrastructure Department which is directly reportable to just one Minister.

After years of endless rhetoric it is time for the Bracks Government to act on delivering the much needed public transport improvements which are crucial to enabling the success of the languishing Melbourne 2030 Metropolitan Strategy. Time is of the essence given ever increasing petrol prices and the disastrous effects these increases have on household income and economic growth.

Victoria and Melbourne 2030 requires the abolition of VicRoads and the combining of Planning and Infrastructure (including Roads and Public Transport) into a combined government department.