Today, upon invitation from Dr. Robin Goodman, the Postgraduate Course Coordinator for the Environment and Planning Program at RMIT, I presented a community perspective into the Ringwood Transit City Project for RMIT’s Integrated Transport Planning Course.

Given that the course focused on Transport and Planning, my presentation covered the current issues in Ringwood, examining the four areas of public transport, planning, pedestrian/cycling linkages and green open space and the fact that these four key areas are interrelated.

For example since there is poor public transport within Ringwood, this leads to a need for excessive car parks resulting in less green open space, which in turn creates a pedestrian hostile environment and results in bad planning outcomes. 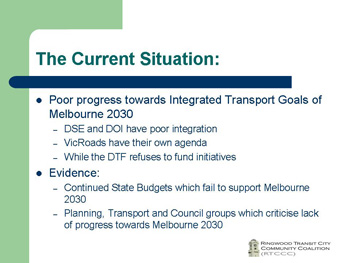 The cyclical nature of these four components is already evident within Ringwood, where 62% of land consists of roads and car parks, against a Melbourne wide average of just 40%. This leaves only a minority of land available for community, residential or commercial purposes a and is a startling contrast to the rest of Melbourne. 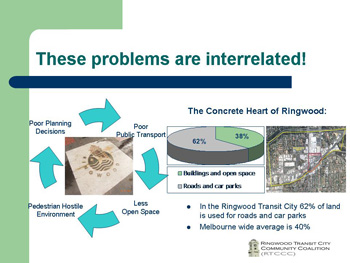 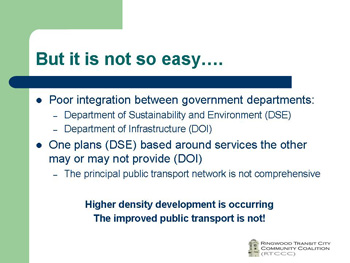 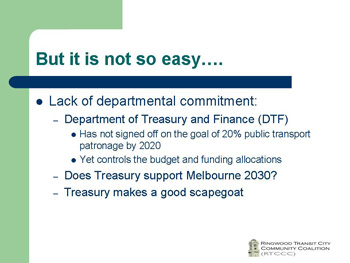 This has ultimately resulted in Melbourne 2030 being nothing more than a disappointment since the government has failed to provide any real leadership in ensuring the success of this plan.

This disjointed approach is apparent with the failure to include bus services along key major roads, such as Maroondah Highway, Canterbury Road and Wonga Road, as part of the principal public transport network.

Including these routes as part of the principal public transport network would ensure services that would operate seven days per week from early morning to midnight.

The failure to include Maroondah Highway on the principal public transport network, for example means that the main thoroughfare linking Ringwood to Croydon and Lilydale is considered nothing more than a local road. 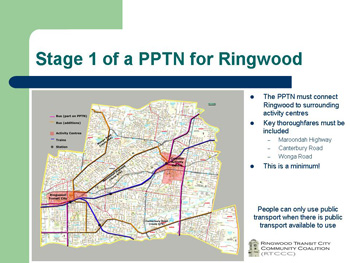 Melbourne 2030 will continue to disappoint until there is real integration at both a Ministerial and Departmental level. This will only occur once if there is a combined Infrastructure and Planning Portfolio, to provide the crucial linkage required between transport, infrastructure development and planning. 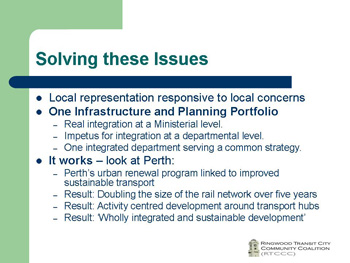 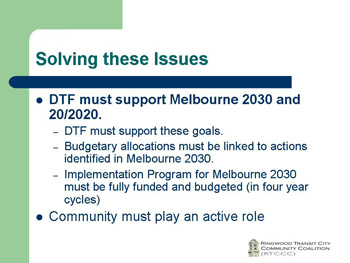 Until such integration is finally provided, including the linking of State Budgets to the outcomes of Melbourne 2030, the Government will deliver nothing but continue to largely disappointment in regard to planning and transport outcomes. The State Government must show leadership and create a combined Infrastructure and Planning Portfolio to save Melbourne 2030 from further failure.