Manningham sees the 'End of Suburbia'

By Alex MakinOctober 18, 2006No Comments

This evening the Public Transport Users Association (PTUA), in conjunction with Manningham City Council, held a screening of the End of Suburbia to supplement the Destination Doncaster Launch.

Chris Trikilis, the PTUA’s Doncaster Coordinator, accompanied myself as Vice-President and Manningham City Councillor Grace La Vella in providing an overview of the film and highlighting the ramifications of continued public transport neglect within Doncaster and Manningham.

Manningham is the only municipality in Melbourne that lacks any form of rail access. The extension of tram 48 with a restructuring of the bus network would not only provide greater transport choice but would also spur much needed investment within Doncaster Hill. As demonstrated in Box Hill, the extension of tram route 109 to Box Hill rejuvenated the town centre, extending tram 48 for Doncaster would provide a similar effect for Manningham. 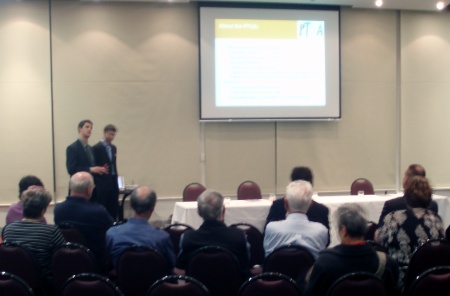 In the longer term heavy-rail via the Eastern Freeway is the only viable alternative to ensuring quick and efficient journeys into the CBD and inner suburbs. Manningham has a similar population density and size to Glen Waverley and yet its needs are constantly being overlooked.

It is time for all political parties to deliver urgent public transport improvements to Manningham.