Peak Oil and the impacts of climate change have risen in prominence this week with both the Municipal Association of Victoria (MAV) and a coalition of community groups led by the Public Transport Users Association (PTUA) organising conferences on these issues.

I attended the Peak Oil, Petrol Prices and Climate Change conference which was organised by the Public Transport Users Association (PTUA), Environment Victoria and the Victorian Council of Social Service (VCOSS) and held at the DOI Theatrette at Nauru House.

Peak Oil, whereby the supply of oil is unable to meet demand, was first theorised by Marion King Hubbert in 1956. Despite the constant crticisms throughout the reminder of Hubbert’s career, he successfully predicted the peaking of US domestic oil supplies. On a world-wide scale peak oil it is predicted that peak oil will occur somewhere between 2010 and 2020, the exact figure being difficult to determine due to the uncertainty surrounding the actual level of oil reserves within the Middle East.

The conference attracted prominent speakers such as Professor Peter Newman, one of Australia’s leading urban transport academics, Dr. Jago Dodson, who investigated the vulnerability of Australia’s cities in responding to rising petrol prices and Dr. Ian McPhail the Commissioner for Environmental Sustainability, who recently highlighted the State Government’s poor performance in regard to public transport and land use planning. 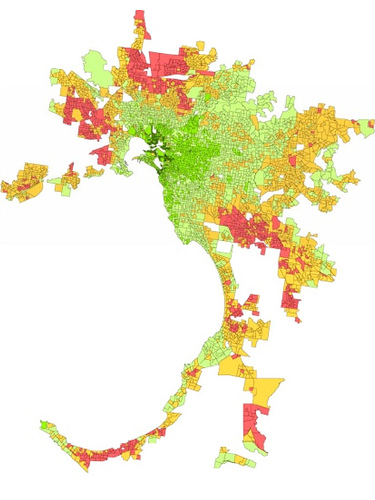 Regardless of the actual date of peak oil, it is clear that petrol prices are continuing to rise due to the demand for oil from countries such as India and China. Rising petrol prices place an increased financial burden on car dependent households, such as those located in Melbourne’s outer suburbs. These suburbs are dependent on car travel largely due to State Government neglect in providing fast, frequent and readily available public transport.

While Maroondah Council’s 2007/2008 Budget approved the hiring of a new full-time Transport and Sustainability Officer and the recently adopted Pedestrian Strategy will assist in focusing council on improving and increasing the level of walking within the municipality, we are still lacking any clear leadership from the State Government towards improving public transport.