While the State Government seems more than able to set ‘aspirational’ targets, the government has demonstrated very little compulsion to actually such goals. This is clearly evident in regard to the State Government goal of increasing the proportion of rail freight to and from ports to 30% by the year 2010. While it is laudable to have such goals and thus ensure the efficient movement of goods and the mitigation of traffic congestion, the State Government appears to be dismally failing in achieving this target. In fact Appendix B of the 2007-2008 State Budget Papers clearly show that rail freight usage fell over the past twelve months. 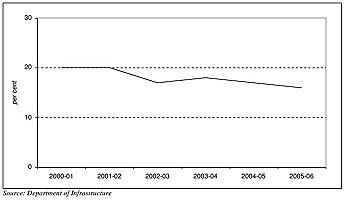 This lack of commitment places both the community and local government in a precarious position due to worsening levels of traffic congestion and greenhouse emissions. The creation of a public transport and freight network that achieves significant modal shift is justified on economic, social and environmental grounds and yet the State Government has still been unable to coordinate its response to such targets.

With this continued State Government inaction, one of the key outcomes from the meeting was the need for greater collaboration between the many council advocacy groupings, including the Metropolitan Transport Forum and the Eastern Transport Coalition. Increased collaboration between these groups will lead to a concerted advocacy campaign and hopefully encourage the government to finally get its act together.