As part of today’s meeting of the Melbourne 2030 Reference Group I was invited to introduce the Eastern Transport Coalition and to discuss ‘Creating A City That Works’, a report compiled by the Commissioner for Environmental Sustainability.

The presentation provided an opportunity to discuss the aims of the Eastern Transport Coalition and its goals on improving the sustainability of Melbourne’s eastern suburbs through advocating for public transport improvements.

The report, which was released in May 2007 examined the sustainability of Melbourne and had three key findings:

Passenger vehicles contribute 56% of Australia’s transport related emissions, meaning public transport and providing an alternative to car dependence, will be a requirement for any effective strategy that aims to reduce greenhouse emissions. 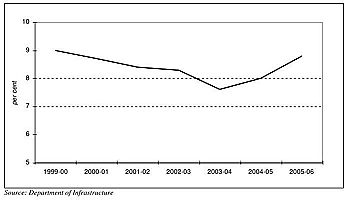 While the number of people using public transport has increased, modal share according to the 2007-2008 State Budget papers has remained around 9%. The lack of interim targets and a detailed plan to achieve these goals makes it difficult to measure its progress. While the State Government continues to support its lacklustre transport strategy, Meeting Our Transport Challenges, the Commissioner demonstrated that the patronage targets were not ‘strongly reiterated as a policy that drives MoTC [Meeting Our Transport Challenges]’

Furthermore the Commissioner stated that “The 20/2020 target needs to be supported with a series of clear intermediate steps that show how it will be achieved.”

It is clear that the State Government must revise its transport policies if it intends to truly designate public transport as a priority.

The ongoing lack of coordination between public transport, roads and planning has had serious ramifications at a local level, particularly in regard to the Ringwood Transit City. State Government support for Ringwood has been marred with uncertainty, including the current lack of commitment over the much needed upgrade of Ringwood Station and improvements for pedestrians attempting to cross Maroondah Highway.

The desire to improve pedestrian access in Ringwood, such as providing less waiting time for pedestrians across Maroondah Highway has been continually stymied due to the lack of coordination between VicRoads and the Public Transport Division of the Department of Infrastructure.

Likewise the current inadequate rail frequencies beyond Ringwood, which result in a mere half hourly service during weekdays and an even worse frequency of bus services, restricts the potential for public transport to reduce car dependence within the centre of Ringwood.

As the ward councillor for much of the transit city area, I have been insisting on improvements to sustainability, such as footpath construction with new developments and water and energy sustainability, but a commitment from the State Government is required to ensure the provision of public transport improvements.

If coordination between State Government departments was improved and if an action plan and interim targets were developed to secure the goal of increasing public transport modal share to the 20% by 2020 then a commitment to the redevelopment of Ringwood Station and other public transport improvements would have been readily provided.

The next State Budget, due in May 2008, will test the State Government’s commitment to both Ringwood and our urban sustainability.