This morning the Ringwood Spiders, a football club for people with disabilities, played Parkside from Alphington on the Spiders’ home ground at Jubilee Park in Ringwood. While Parkside may have won the game, the match was extremely close and the Spiders played some great football. 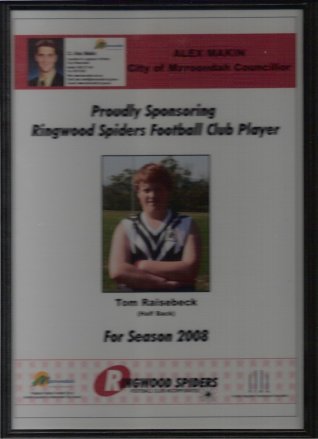 Today’s match also included a Gala Day for sponsors of the team and it was great to hear that every player has a sponsor through the current football season. The $150 sponsorship provides an opportunity to not only financially assist the club but also raises awareness of the Ringwood Spiders. While the Ringwood Spiders receive some money through Maroondah City Council the club does not receive funds from the football league or other organisations.

I am sponsoring half back Tom Raisebeck, a new player for this season who played some great football with his team mates. It is great to see the team building up its skills and becoming a formidable force within the league.

Just three rounds remain in the 2008 FIDA season and the Spiders have two remaining home games, Sunday the 29th of June and Sunday the 27th of July.