The presentation, which was delivered in my capacity as spokesman and founder of the PTUA South East Branch, was created to demonstrate the need for institutional reform within the current government bureaucracy.

The current departmental framework provides little integration between planning and transport with allows VicRoads to dominate the transport debate with its own budgetary allocation and lobbying efforts.

Unfortunately the State Government is clearly failing to meet its transport challenges through providing very little tangible public transport improvements for the south eastern suburbs and Melbourne overall. The State Government has wrongly allocated up to a billion dollars on projects such as Dandenong triplication while choosing to neglect the growing regions of Pakenham and Cranbourne which must wait up to six years for the construction of much needed stations at Lyndhurst and Lakeside. 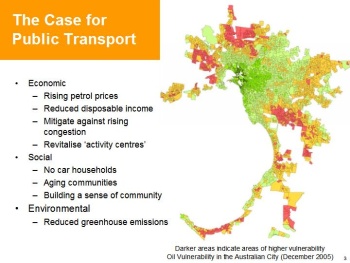 The current myth about rail capacity provides clear evidence of failure within the current institutional framework which is unable to foster the required expertise to strengthen, plan and extend Melbourne’s rail network. International best practice states that a dual rail line can serve up to 30,000 passengers per track per hour while the Dandenong rail line has just 35,000 passengers per track per day! This demonstrates that the current claim of capacity limitations is due to nothing more than the failure to recruit the required expertise.

Perth’s Clarkson rail line (serving the northern suburbs) operates on two tracks and yet is able to provide regular express and stopping services. The Dandenong rail corridor would be better served by signalling upgrades and the use of passing loops, all of which could be operational within 12 months compared to the costly third track proposal which would mean that passengers would see no relief within the next ten years. 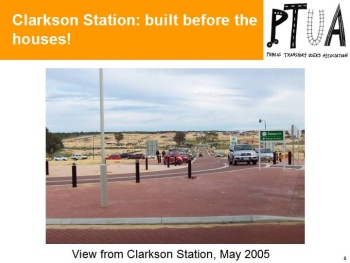 Melbourne’s bus network needs to be overhauled to create a two-tiered system following the model established in Perth. The first tier would form part of the principal public transport system with buses operating along all of Melbourne’s main roads in a frequent and direct manner with service levels consistent with the rail network, thus ensuring the creation of ‘tram-like’ bus services. The second tier would serve residential areas that are located away from main roads (such as Endeavour Hills) and feed people into the principal network (whether it be bus, tram or train). The creation of such a network would provide economic savings through eliminating route duplication and provide a network structure that is easy to use and to understand.

Public transport is being hampered by the failure of the Bracks Government to provide institutional reform through merging VicRoads and the Public Transport Division into a combined transport authority responsible for network planning and service coordination. As such it is little wonder that there is widespread support for reform within submissions made to the Victorian Competition and Efficiency Commission (VCEC) inquiry into managing traffic congestion. 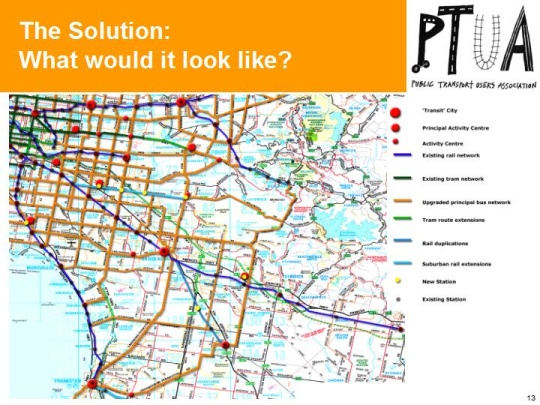